Posted on November 9, 2014 by A Londoner from Afar

I am impressed with all of the marketing and PR around these events, how effectively they appeal to our feelings and make us see another side of these shameful events. I mean taking the side of those who fought for their country or suffered as a result of power-hungry polititians, making it dramatic somehow to better reach us.

Drama and romanticism help a bit with this. I reckon that we still find some kind of romanticism (of the wrong type??) and appealing drama in the idea of soldiers fighting, letters from the barracks, people returning home or still looking for their relatives, etc. Maybe because we keep seeing the same things people saw as a hundred years ago, even if it is only in movies and newspapers.

The poppies in the Tower of London are quite dramatic in that sense. It is an artistic representation called Blood Swept Lands and Seas of Red by Paul Cummins and Tom Piper. The ceramic poppies represent the blood of those who died for their country. 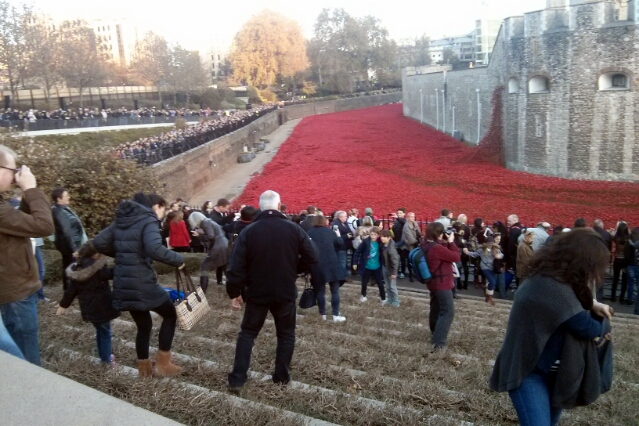 All of them have been sold too. They cost £25 and the expected £15 million proceeds are going to be shared equally amongst a group of selected service charities around the country. Other actions include seeing the poppies everywhere: posters in the tube,on TV, fundraising events in offices, etc.

Still, people do not want to go to war. Remember the huge demonstrations against Blair and other polititians’ idea of going to war in Irak? Learn!

Drama played a bit of a role too in the celebrations of the fall of the Berlin wall. They used white balloons to mark the stretch of the wall to symbolise its disappearance.

It was celebrated in other parts of the world too to make it clear we do not want anything like this to happen again. The picture below is from Madrid.

Still Gorbachev is warning about a new cold war. Do you want it?

Cheese & choc lover, marketer and linguist who would like to explore and share those aspects that still have the power to make her stay in the amazingly vibrant city of London after nearly 10 years.
View all posts by A Londoner from Afar →
This entry was posted in Events, Marketing and tagged events, fall of the Berlin Wall, London, Marketing, Paul Cummins. Bookmark the permalink.