We are living rocky times.

Economic crisis is still looming, which also brings all the insecurity that one can expect from those who have not that much to lose in life – or who have got their priorities wrong and their circumstances do not allow them to see it, let alone get out of the hole they are in. Welcome to the 21st century revolution times.

Crisis affects people in different ways. The country or area where they are based has a huge bearing on that. Think Greece, whose own sovereignty is starting to get shaken by the fact that a foreign IMF official might be overseeing the next instalment of the bailout payment they might actually not even get after all.

I mentioned on my last entry that I would discuss the new ´Spanish revolution´. It is not 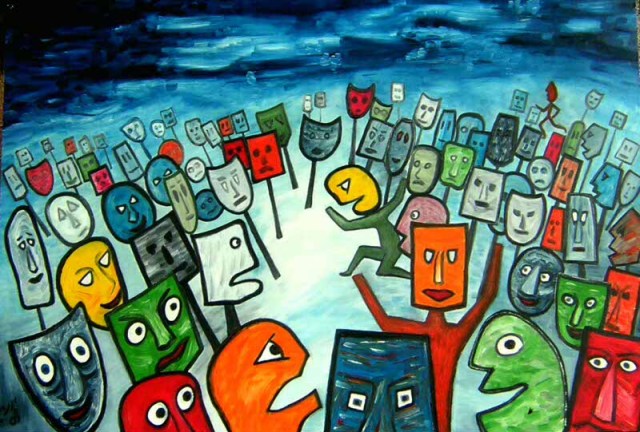 an isolated, one-off event, but part of what has been happening in the old Europe and other parts of the world. Just like citizens in Tunisia and in other countries around the world after them, many Spaniards have been camping in front of the Spanish Embassy in London for weeks. No political affiliations or support  to any party or political belief intended.

Their first idea was to express their disgust for the current political and voting systems and to support others who were already staging demonstrations all over the country ahead of the recent local elections in Spain. The reason behind it was to encourage blank vote, so that power would be shared more equally amongst the various political parties across the country. It is worth noting here that Spaniards registered abroad are only allowed to vote in general elections, and that it is illegal for them not to be registered with their embassy after a year living abroad.

Any results? Unsure yet. One of the two major political parties has beaten all the rest, as expected. They are just seen as the best of two evils. I believe people have gone with what is believed to be the safest option here.

What is really positive and unusual here is their organisation. A small group of people got together and advertised these demonstrations using social media and word of mouth. The support has been overwhelming so far. They did something else, they wrote down specific aspects that should change and how and are using professional communicators to ensure they are heard. Good for them! They keep demonstrating in front of the embassy every evening.

Now, this is positve, isn´t it? However, let´s not rush. Mentality is very hard to change. It is the same way of thinking that has recently brought about a political party which has not really been of help to most throughout history. I do not believe that a country like Spain actually welcomes this kind of ideas, although everyone can have an opinion!

Eearthquakes, tsunamis, volcanoes, hunger, and political unrest. All at the same time. Unrest is going to continue until some things change, but it is going to take a while.

Were you at any of the demonstrations? What can you make of all this situation?

What´s your view on the crisis or how it is being portrayed in the media?

Cheese & choc lover, marketer and linguist who would like to explore and share those aspects that still have the power to make her stay in the amazingly vibrant city of London after nearly 10 years.
View all posts by A Londoner from Afar →
This entry was posted in Marketing, Politics and tagged communicators, demonstrations, earthquake, Facebook, Greece, IMF, London, politics, revolution, social media, Spain, Spanish, UK, unrest, WoM, word of mouth. Bookmark the permalink.